This crashed car is one of a few crime scenes involving a 20+ shots fired. This is at N. Capitol and Florida NW pic.twitter.com/sEdLTStRYw 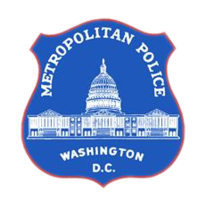